The news of Colin Vickerman’s death in January 2022 was received with great sadness at Halifax Sailing Club. Colin was a long time member and former Commodore. He made a massive contribution to the Club. In the last few years, sadly he was not able to be so active due to illness, and died peacefully with his family in attendance.

Colin joined the Club in 1986 and started his sailing in a Mirror dinghy. Straightaway he was smitten with the sailing bug obtaining qualifications which eventually led him to having a share in a sailing yacht in Greece, which he loved.

We all have great memories of him:-

For 5 years between 2001 and 2005 he was the forward looking and forceful Club Commodore.

It was Colin’s vision which saw the installation of electricity at the Club, he ground the best deal out of the generator and gas suppliers who probably dreaded his negotiating calls. The installation was organised by him and he fabricated and welded the cage which kept the generator safe from thieves. He was cursed by a few of us as the locking bracket on the cage dug into our backs while doing the servicing.

He championed the purchase of the Rigiflex safety boat, which was over 10 years ago and it’s still going strong.

On the water you certainly knew if he thought you were the “give way” vessel!

While Colin was around there was no chance of seeing what a kite surfer could do at Fly Flats, what would he have made of foiling boards?

With leftover stone from his garden improvement projects, he would always make sure the reservoir erosion defences were improved with their addition.

Sailing with Colin in UK waters, he was prone to breaking things or dropping them in the sea but to his credit he always used his engineering skills to straightaway manufacture a replacement part!

Above that Colin was a happy sailing companion and whilst putting his heart and soul into his sailing, doing more than his share about the boat, also had time to make us laugh.

He was generous in his help to others and often would assist club members by making replacement metal parts for broken dinghies or trollies.

Colin was always eager to learn. When he took on the role of Club Commodore he had little knowledge of how to conduct a meeting but he soon learned and became a worthy Commodore driving the Club forward for 5 years in the role.

Colin was a truly genuine bloke, Halifax and Yorkshire through and through and I feel privileged to have been able to count him as a friend.

Colin was a kind and humorous Member of the Club with a ready smile. He is sadly missed, but will be remembered for many years.

Last Saturday saw the club hold its annual Fun Day. Preparations were made for activities in all weathers but for once the weather behaved itself and we were able to have activities on the water, resulting in this year’s Fun Day being the best yet.
Thank you to all the people who helped with the event. Simon, Adele and Eve organised the BBQ which was a great success. Thank you to Carol who brought lots of cake, including a wonderful chocolate cake of which I managed to get a piece. Thank you to Daniella for providing the sweeties and salads, to Cherie for the potato dishes and all others who brought food for the party. A very large thank you must also go to the parents, friends and Club members who supported us.
Prizes of Gold, Silver, and Bronze medals were given to the winners of the water games and Elliot’s Mum won the Treasure Hunt. We then gave ‘prizes’ to all our instructors, safety boats crews and helpers without whom we would not be able to run our Young Peoples’ On board Sailing. Special mention must go the person who won the trophy for Sailor of the Year, Libby. Thank you to our Commodore William for presenting the prizes.
On a personal level, thank you for the beautiful flowers.
Next week there will be a windsurfing taster session although dinghies will be available for those not tempted.

Thanks again
Sue, and Henry and the team

Wednesday night saw the running of a memorial race for one of the club’s long standing, stalwart and much loved members who sadly died whilst racing his Streaker dinghy at the club on Sunday September 5th.

A beautiful evening saw a minute’s silence in memory of Kevin before several dinghies completed one race, with many more members ashore. After the race, all stood outside and swapped stories of Kevin over a drink or two.

Kevin will be much missed by all members, not least for being such a jovial and friendly character. He loved racing sailboats and passing his knowledge on to others. All our thoughts are with his family at this very sad time.

The Young People’s Saturday Sailing (YPSS) team checked on the weather and wind speed predicted for Saturday 7th Aug and made a very quick decision. It wasn’t so much the average windspeed, rather the gusts that were going to be unsuitable for sailing at Warley Moor. So the team gathered helmets and waterproofs and decamped to our sister club, Denholme SC. Six Young People, Sue Lamb and Henry Goodman took to the water. The picture below belies a day of rain and strong wind. There were one or two capsizes but not as many as  anticipated – our Young People are rapidly becoming experts at sailing. Thanks to Daniela Chinneck for the photo and Nick Fenn and Mark Little for covering safety. All had a wonderful time. YPSS will be returning to Halifax next week.
Happy Sailing, Sue and Henry.

Saturday saw an excellent afternoon’s sailing with the Young People joined by a few adults and fourteen boats out on the water. A fair breeze helped to cool participants but maybe not enough as lots still ended up in the water. Thanks to all who helped, afloat and ashore. It is good to see our Young People, some of them who had never sailed before this season, gaining skills and confidence. (Thanks to Sherri Highley-Hammond for the below picture.) 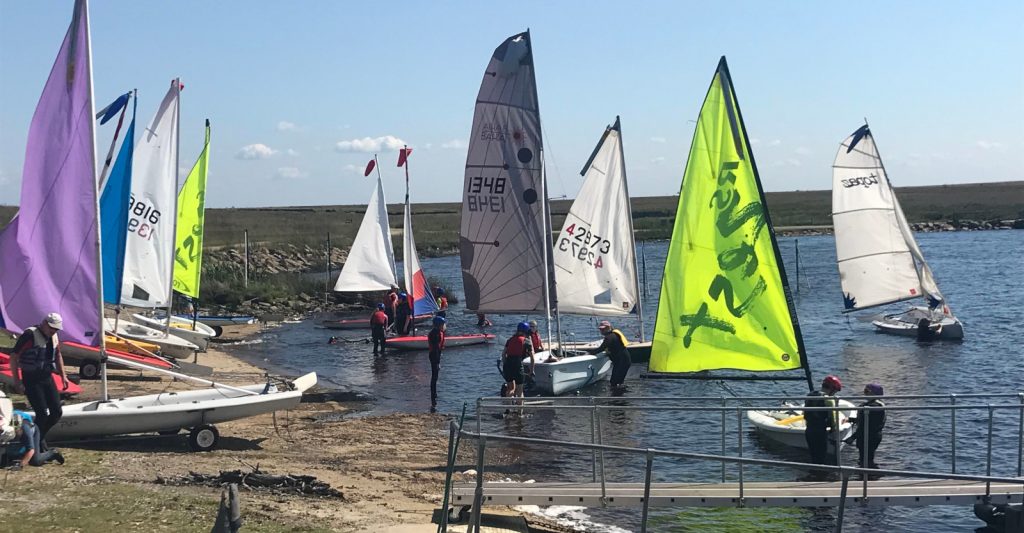 Sunday provided equally good conditions. Beginners sailed in the club’s RS Quest, several windsurfers were out looking for gusts!! and a mixed fleet of dinghies and catamarans took part in the dinghy racing.